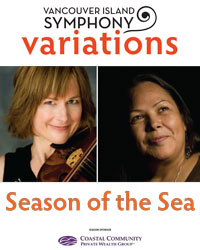 variations: Season of the Sea

Seasons of the Sea describes the seasons on and by the sea, with words inspired by the 13 moon season of the Coast Salish peoples, who used the tides and seasons of the sea, and the life it brings, as their calendar. The narrative written and performed by storyteller Rosemary Georgeson, Sahtu Dene/Coast Salish artist and violinist Joan Blackman with music by Jeffrey Ryan.
Seasons of the Sea is paired with Vivaldi’s Four Seasons which provides a contrast and comparison between past and present and between cultures; it is an evocation and celebration of coastal living through the inspiration of the sea.