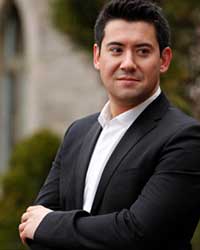 Magnetic, easy-going, and delightfully articulate, Canadian pianist Ian Parker captivates audiences wherever he goes. He has appeared with the philharmonic orchestras of Buffalo, Calgary, Erie, Hamilton, and Louisiana, as well as the Cincinnati Chamber Orchestra, the Cleveland Orchestra at Blossom, Hong Kong Sinfonietta, and the symphonies of Cincinnati, Edmonton, Eugene, Greenwich, Honolulu, Kitchener-Waterloo, Long Beach, National (Washington, D.C.), Okanagan, Pensacola, Quebec, Regina, San Francisco, Santa Barbara, Spokane, Toronto, Vancouver, Victoria, Virginia, and Winnipeg. During the 2016/2017 season, he made his debut with the Illinois Symphony performing his vibrant Gershwin repertoire, as well as the Meridian Symphony, and returned to the Vancouver and the Okanagan Symphony, among others. The 2020-2021 season was to include return performances with the Victoria Symphony and Vancouver Symphony as well as debuts with the Richmond Symphony and the and Lake Forest Symphony. An enthusiastic recitalist, Ian Parker has performed across the United States, Western Europe, Israel, and throughout Canada on tours with Debut Atlantic and Jeunesses Musicales du Canada. He made his Lincoln Center recital debut at the Walter Reade Theater in 2004. Recent and upcoming appearances include recitals presented by the North Okanagan Concerts Association, UCLA, the University of British Columbia, and collaborative performances with the Hawaii International Music Festival, the Morgan Library, and multiple appearances on a new chamber music series at North Vancouver's Kay Meek Centre, for which he has recently become Artistic Director. First Prize winner at the 2001 CBC National Radio Competition, Ian Parker has also won the Grand Prize at the Canadian National Music Festival, the Corpus Christie International Competition, and the Montreal Symphony Orchestra Competition. At The Juilliard School, he received the 2002 William Petschek Piano Debut Award and, on two occasions, was the winner of the Gina Bachauer Piano Scholarship Competition. Heard regularly on CBC Radio, Mr. Parker has also performed live on WQXR (hosted by Robert Sherman) in New York. Born in Vancouver to a family of pianists, Ian Parker began his piano studies at age three with his father, Edward Parker. He holds both the Bachelor and Master of Music degrees from The Juilliard School, where he was a student of Yoheved Kaplinsky. While at Juilliard, the Canada Council for the Arts awarded him the Sylva Gelber Career Grant, which is given annually to the “most talented Canadian artist.”