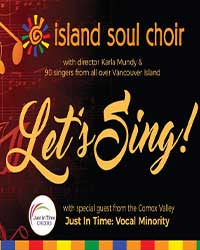 As the world continues to regain a sense of normalcy, a renewed sense of creating a better world seems to be gaining more traction. For this concert, conductor Karla Mundy has selected a repertoire that expresses our renewed joy, resilience and determination to make our lives, our communities and our world a better place to be. From raucous spirituals to soulful prayers, demands for change to celebratory praises, this concert will surely touch, move and inspire our audience.

The choir will again sing a new composition by Ali Romanow, a multi-instrumentalist, educator and composer from the Comox Valley. Other songs include Brian Tate’s arrangement of Des’ree’s You Gotta Be, Lonnie Norwood’s version of Myron Butler’s Speak, Coco Love Alcorn’s Unbreakable, and Jon Batiste’s Sing, along with Dr. Ysaye Barnwell’s adaptation of The Lord is My Shepherd, and the Detroit Mass Gospel Choir’s version of The Storm is Passing Over. There’s also an amazing English-Hebrew-Arabic version of Matisyahu’s One Day (Koolulam). No concert would be complete without an African song, and this time, Island Soul Choir will perform a Xhosa church song that was learned from members of the St. Anthony’s Church Choir in Langa, Cape Town. You don’t want to miss it!

Island Soul Choir is pleased to welcome Just in Time Choirs’ Vocal Minority as their guest for this concert. Vocal Minority is an auditioned mixed-voice choir based in the Comox Valley. They are a close-knit group of 16 singers that combine a wealth of musical talent to share with their audiences. They sing a repertoire of contemporary music, including songs from genres such as jazz, rock, pop, folk, funk, Latin, soul and gospel. Vocal Minority is renowned for their energetic, engaging, and musically rich performances. They also make a hard team to beat at “name that tune”! The ensemble rehearses weekly, led by Wendy Nixon Stothert, who directs six choirs and organizes choral events in the Comox Valley.