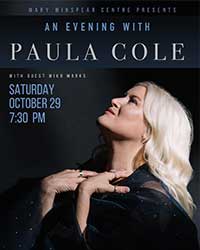 With a musical catalog defined by honest and deeply personal lyrics carried by her powerful, radiant voice, Cole has always had a gift for discerning the underlying humanity in stories from her own life as well as those around her and channeling those emotional elements into captivating music. On her latest record, American Quilt, Cole has applied this natural insight to American history and musical roots traditions by interpreting a selection of classic songs.

“I wanted this album to reflect a patchwork of music from the cities and the mountains, the fields and the rivers – from movies to melodies that traversed oceans, centuries, cultures, and continents – sewn together with our collective heartstrings,” says singer-songwriter Paula Cole. Not just a geographical tapestry, the breathtaking collection is a cavalcade of blues, jazz, folk, pop, and gospel – with Cole’s remarkable voice the roadmap to Americana, jazz, and standards.

American Quilt follows 2019’s acclaimed album of originals, Revolution, deemed by PopMatters as “an exceptional piece of work, a timely reminder of how soulful and perceptive a writer and singer Cole is and has always been.” Cole’s legions of fans would agree.

They were there when Cole garnered seven Grammy nominations for her second album and major-label debut, This Fire, with its timeless hits, “Where Have All the Cowboys Gone?” and “I Don’t Want to Wait” (later the theme song for hit TV series Dawson’s Creek). Along with winning Best New Artist in 1997, Cole was the first sole woman (without collaborators) nominated as Producer of the Year. At the time, even convincing a label to produce one’s own album was a major achievement.