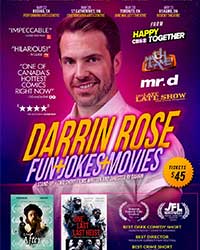 Darrin Rose is one of Canada’s most popular comedians, and an award-winning writer, filmmaker and actor too! He played Bill on the long-running CBC sitcom Mr. D, hosted Match Game on the Comedy Network, and was a writer on the CBS sitcom Happy Together starring Damon Wayans Jr. He has appeared at Just For Laughs eight times, and twice on The Late Late Show on CBS. He was called “hilarious!” by TV Guide, and “one of the hottest comedians in Canada” by GQ magazine.

Darrin’s first short film, Love After Anne, garnered a Best Actor nomination at the Houston Comedy Film Festival for star K. Trevor Wilson, from the hit show Letterkenny. His second short film, One Last Last Heist, stars Darrin and Suresh John from Mr. D. It has won awards at festivals in Los Angeles, Houston, and London, England. Both short films will play at the show!

Show is approximately 90 minutes plus a meet and greet in the lobby after.