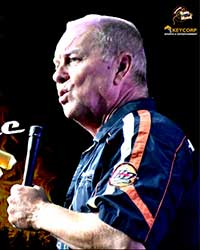 × Train Wreck Comedy presents “The Harley Guy” Herb Dixon, who brings his Full Throttle Comedy Tour to The Port Theatre. You Won’t Believe What Your Ears Will See!

You don’t get to pick your own nickname, and when you can impersonate a Harley Davidson better than anyone in the world, like Herb Dixon can, you get the best nickname ever, “The Harley Guy”.

In 1979 Herb Dixon began making club audiences laugh in Vancouver comedy clubs, quickly becoming one of the most in-demand comedians in North America. He auditioned for Star Search in 1994 and not only made it onto the hit show hosted by Ed McMahon, he appeared on three episodes, successfully defending his comedy title twice. Herb was officially established as a must-see act!

He performed at the massive 17,000 seat grandstand show at the Calgary Stampede not once, but twice in 2002 and 2005. In 2003 Herb was invited to put his Harley Davidson impression to the test by none other than Harley Davidson themselves, at the 100-year anniversary event in Milwaukee, sharing the stage with BB King. Herb impressed the tough biker crowd and knew for certain; his Harley impression was as good as they get.

From there he hit the road, opening for the likes of the Doobie Brothers, The Beach Boys, Blake Shelton and LeAnne Rimes, just to name a few. In 2009 his Harley impression was once again put to the ultimate test when he opened for Kenny Chesney at the famous Sturgis Motorcycle Rally.

Herb is far more than just a Harley impression. From corporate conventions to cruise ships and headline performances, Herb Dixon finds a way to have fun with every audience. Herb is known as one of the most consistent corporate performers and he always adapts his routines depending on the audience’s response to his jokes.

Special Guest Rob Balsdon Rob Balsdon’s comedy style combines a brutal honesty with a likable innocence and a very quick wit; beware, his contagious smile! Throughout his comedy career, Rob has shared the stage with some of the biggest names in Canadian comedy including Gerry Dee (Mr. D), Brent Butt (Corner Gas) and one of his comedy idols, film star and SNL alum, Norm MacDonald!