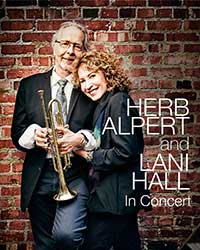 September 2019 marked the release of Herb’s album, Over the Rainbow. The album features 12 songs including an original called “Skinny Dip” and a cadre of classic and well-known tunes interpreted and performed in a way only Alpert can deliver. Herb also released Music Volume 3 – Herb Alpert Reimagines the Tijuana Brass which reached #2 on the Contemporary Jazz Charts. The Music Volume 3 release, as well as the holiday music video, Carol Of The Bells/We Wish You A Merry Christmas – Medley from The Christmas Wish album rounded out a successful 2018 which included a 50 city tour.

Through the Herb Alpert Foundation, Herb and Lani have dedicated their lives to philanthropy, funding programs that help bring creativity to young students and keep creativity alive for all the arts, for artists young and old, including jazz education and programs that teach compassion and well-being. 2019 marked the 25th anniversary of the Herb Alpert Award in the Arts celebrating 125 awardees over the past 25 years.