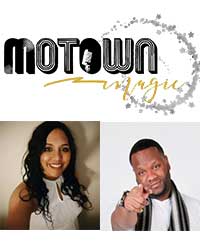 MOTOWN MAGIC blends together some of the most iconic artists who helped create a soundtrack that would transform America including Stevie Wonder, Aretha Franklin, The Jackson 5, The Temptations, Marvin Gaye & Tammi Terrell, Smokey Robinson, and Diana Ross and the Supremes among many others.

Featuring over 20 classic hits such as ‘My Girl’, ‘Ain’t No Mountain High Enough’, ‘Please, Mr. Postman’, and “Respect” this British Columbia premiere event will have you ‘Dancing In the Streets’!

Join us this October for the World Premiere of Motown Magic – 60 Years of Music Hits as we take you on a journey of classic music that made history, defined the sound of a generation and got the whole world moving to the same beat.