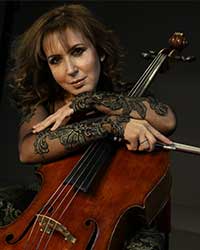 × Ofra Harnoy has established herself as one of the great cellists on the world’s concert stage. Born in Israel, Ofra immigrated to Canada with her family at the age of six and by age 10 she had already made her professional debut as an orchestral soloist. A five-time JUNO award winner, Ofra has recorded over 40 solo albums spanning many musical styles and genres. Ofra also became the first Canadian classical instrumental soloist since Glenn Gould to gain an exclusive worldwide contract with RCA Victor. She received the Order of Canada, played at the request of Prince Charles, President Bill Clinton and three Canadian Prime Ministers. Ofra is a stunning performer of unparalleled calibre.