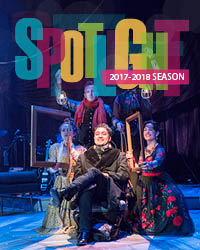 Book, music, and lyrics by Amiel Gladstone and Veda Hille Based on the poem by Pushkin and the opera by Tchaikovsky

When Evgeni Onegin visits the Larin family estate, his romantic charms stir passions long forgotten by its residents. Poet Vladimir Lensky’s romantic ideals are challenged (a duel!) after Onegin flirts with his fiancée Olga Larin, and even the sensible Tatyana Larin falls for the handsome rogue. The hit musical moves, shakes, and wakes audiences with its sweeping score, leaving the powerful question swirling in their minds: Look around, look around, look around, do you see someone worth dying for? Winner of 10 Jessie Richardson Theatre Awards in 2016 including outstanding production of the year, plus outstanding actor and actress, supporting actor, lighting design, set design, costumes, composition and direction.