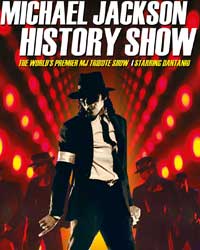 The world’s most loved MJ tribute is returning to Canada in 2017 with a fully revamped production and a brand new star at the helm, Dantanio.

This will be the first time the show has performed in Canada since 2014 and producers are looking forward to showing-off the new-look production to a mix of long-time fans and new audiences. Despite the touring hiatus and a cast change that has seen original star Kenny Wizz replaced by South African ‘triple-threat’ Dantanio, the show has managed to retain its raft of devoted fans worldwide. When Wizz retired in 2014 Director Johnny Van Grinsven was unsure how fans would react but he has been overwhelmed by the ongoing support for the show and says he gets emails every week, from all corners of the globe, asking when the show will be returning to their home towns.

Though Michael Jackson, with his distinct characteristics and ubiquitous image, is undoubtedly a difficult role to play, Dantanio’s first year as the principal has been impressive. "There’s no hiding with MJ; if you don’t do it right fans pick it up instantly and they are not forgiving,” says Van Grinsven. “But Dantanio is such a talented performer and impressionist that the only reaction we’ve had so far has been complete awe, people just can’t believe how real he is, how well he does it.”

A skilled musician, composer, producer, dancer and impersonator, Dantanio joined the production with a formidable talent base plus an established love for Michael Jackson which was obvious -his dance and vocal career littered with MJ references stretching back to his childhood. Staying true to its original goal – to honour the life, music and creative genius of Michael Jackson – the show’s set list includes more than 20 Jackson favourites including Billie Jean, Thriller, Smooth Criminal, Bad, Beat It, ABC and They Don’t Really Care About Us all exquisitely reconstructed with the famous costumes and iconic dances to match. Producers have gone above and beyond to upgrade the already jaw-dropping theatrics, visiting trade shows world-wide in order to secure the newest in lighting and vision technology.

More About Dantanio Born to a Gospel family, Dantanio began singing and dancing at the age of nine, developing a vocal repertoire spanning Pop, R’n’B, Swing, Jazz and Reggae. He went on to create a diverse career in the entertainment industry including theatrical work, songwriting for contemporary Pop stars and the release of two solo albums. As a skilled impersonator specializing in Michael Jackson and Sammy Davis Jr., Dantanio has travelled the world, including London, USA, South Africa, Bahrain and Kenya, and counts Top Gear (Britain), Sun International, and Nedbank among his corporate clients. In 2014 the coveted part of Michael Jackson opened up in one of the world’s biggest tribute shows -Showtime Management’s ‘The Michael Jackson HIStory Show’ -and Dantanio was scouted by the show’s Director to fill the challenging role. Dantanio felt an affinity with Michael Jackson at an early age and his appreciation of Jackson’s dancing evolved into obsessive practice as he taught himself to emulate every detail of the Pop star’s trademark dance style. So good was his imitation that it resulted in his ejection from an amateur dance competition at age 16 because the judges believed him to be of a professional standard. Coming ‘full circle’ from his beginnings as an inspired young MJ fan, Dantanio looks forward to honouring his idol with his role in The Michael Jackson HIStory Show.