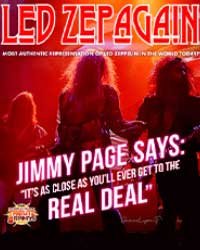 MOST AUTHENTIC REPRESENTATION OF LED ZEPPELIN

LED ZEPAGAIN is the longest-standing tribute to “the world’s greatest band”, replicating the ultimate Led Zeppelin experience. Jimmy Page says, "It's as close as you'll ever get to the real deal". From the high-energy electric classics to the beautiful acoustic works, you will be mesmerized as LED ZEPAGAIN resurrects Page’s soaring guitar leads, Jones’ brilliant keyboard passages, Bonham’s trademark pounding rhythms and the signature Robert Plant vocals. As you experience immortal classics “Stairway to Heaven”, “Immigrant Song”, “Whole Lotta Love” “Rock ‘n’ Roll” and “Black Dog”, you’ll understand why LED ZEPAGAIN has become highly regarded as the most authentic representation of Led Zeppelin in the world today.

With well over a million downloads on iTunes, LED ZEPAGAIN has been featured on AXS TV’s “World’s Greatest Tribute Bands” (2014) and were asked to return, performing the iconic Led Zeppelin album “lV” in its entirety (2017). The band has also entered pop culture, having been mentioned on network TV shows “The Gilmore Girls”, “Chicago Fire” and “Bad Judge”.

From the sound and the look to the vintage equipment and costuming, LED ZEPAGAIN will be the closest thing that you will ever see to a live Led Zeppelin performance! Come on out and see what Jimmy Page was talking about.